Exoplanet science is omnipresent on the roadmaps of all major space agencies and ground-based observatories, and continues to drive the research activities of an increasing number of scientists worldwide. One of the long-term objectives is the investigation of the atmospheric properties of a statistically significant number (>100) of terrestrial exoplanets. The key motivations are to

Key steps towards achieving these objectives will be possible in the coming 10-15 years with upcoming missions such as JWST, PLATO, WFIRST or ARIEL. However, none will provide the statistical dataset of terrestrial exoplanets that is ultimately needed. Given the precision and sensitivity requirements, a space mission seems inevitable for achieving the science goals. NASA is pursuing the idea of a large, single aperture UV/optical/near-infrared telescope (the HabEX and LUVOIR concepts). LIFE follows a complementary approach and focuses on the scientific prospects and the technical challenges of a space-based mid-infrared nulling interferometer. Concrete design studies are expected for the next project phases.

The Science Objectives are driven by the goal to assess quantitatively how often potentially habitable planets are indeed habitable. Why at least 30 (requirement) / 50 (goal) planets are needed is shown in the plot to the right. The plot shows how well the null hypothesis, formulated as “X% of the terrestrial planets orbiting in the (extended) habitable zone of nearby main-sequence stars are habitable”, can be rejected in case NONE of the analyzed planets turns out to be habitable. For 30 targets the hypothesis that 50% of the habitable zone planets are habitable can be rejected with a confidence corresponding to 5-sigma in case of a null-result. In other words, even a null result, i.e., none of the planets is habitable, has significant implications for the general existence of habitable (and inhabited) planets in the Solar neighbourhood.

Why the radius and insolation range? The radius range, i.e., planets with radii between 0.5 and 1.5 Earth radii, is defined by Mars’ radius at the small end and the transition between rocky and envelope dominated planets at the large end. The insolation range, i.e., planets receiving between 0.35 and 1.7 times the insolation of Earth, is defined by the (extended) habitable zone (HZ) for solar type stars (e.g., see review in Kaltenegger 2017), where the outer edge as defined by the so-called “Early Mars limit” and the inner edge is defined by the so-called “Recent Venus limit”. For the radius and insolation ranges considered here, 2 planets in the Solar System qualify as being located in the HZ (Earth and Mars) and 1 of them, i.e., 50%, is habitable. Hence, the baseline case for quantifying the significance of a null-result in case 30 HZ planets are characterized relates to the null hypothesis that 50% of planets in the HZ are indeed habitable.

For LIFE, whether or not a planet can be characterized as "habitable" depends on the outcome of so-called retrieval analyses using the spectra that LIFE will obtain from these planets. These analyses have to provide a quantitative assessment (and a confidence level) about the surface temperature and pressure, i.e., the planets habitability. 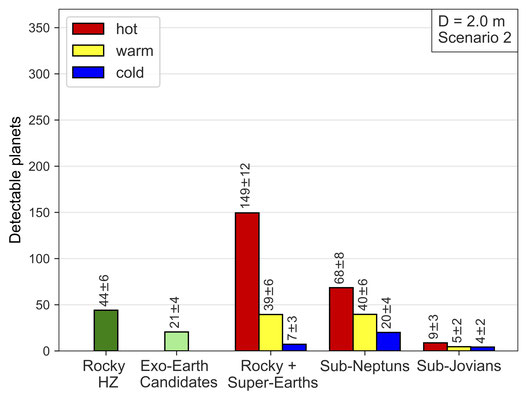 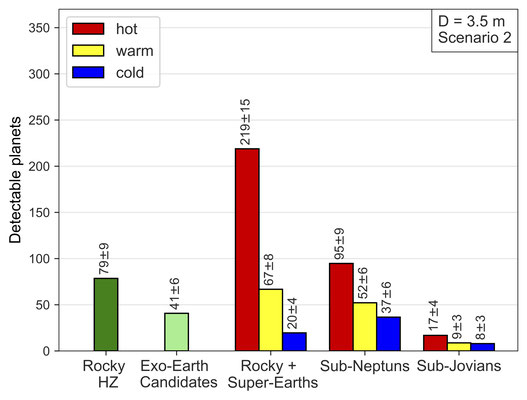 As it is not clear whether LIFE will have a sufficiently long list of concrete targets to analyze given the detection limits of currently ongoing and future exoplanet search campaigns, we assume that LIFE will have to conduct a search to identify the best possible targets. As one of the first steps, the project has revised the expected number of exoplanets that LIFE could detect using LIFEsim, a new simulation tool that considers all relevant astrophysical noise terms and the current baseline interferometer architecture. The results as well as a detailed description of the approach is presented here. These results supersede the analysis presented in two earlier publications (Kammerer & Quanz 2018; Quanz et al. 2018). The Figure above summarizes some of the key findings: it shows the number of expected planet detections categorized by planet types (cf. Kopparapu et al. 2018). These numbers assume 4 collector spacecraft with D=2 m aperture size (left panel) or D=3.5 m aperture size (right panel). 2.5 years of search phase were considered and the survey was optimized for the detection of rocky exoplanets orbiting within the empirical habitable zone of their host star. The uncertainties represent the numerical uncertainties from the underlying Monte Carlo simulations. It shows that more than 20 Exo-Earth candidates can be expected (shown in light green), which are a subset of the rocky habitable zone planets (shown in dark green). The number of detectable planets can be further increased if the survey is optimized for maximizing the total number of detections. This would, however, decrease the number of rocky, HZ planets.

In addition to estimating how many exoplanets LIFE is expected to detect based on our current understanding of exoplanet occurrence rates, investigating which of the already known exoplanets within 10 pc could be prime targets for LIFE is crucial. The Figure on the right provides a first hint and shows that there are already dozens of interesting objects available, some of which have sizes similar to Earth and Venus and receive a similar amount of energy from their - in most cases - low-luminosity M-type host stars.

MID-Infrared vs. optical and near-infrared

Working in the thermal mid-infrared offers the advantage of having access to a larger variety of key molecules expected to be present in the atmosphere of terrestrial planets (see Figure on the left). In principle, absorption features of water, carbon dioxide, methane, ozone and nitrous oxide are present in the 5-25 micron regime. In addition, collision induced absorption of nitrogen molecules was observed in spectra from Earth around 4.15 micron which could offer a means to constrain the bulk mass of nitrogen dominated atmospheres. Also, in case of suitable atmospheric windows, observations in the mid-infrared may allow a direct estimate of the planets' surface temperature, a key parameter to assess the potential habitability of a planet. Finally, by combining the integrated observed flux with atmospheric models, the thermal emission provides constraints for the radius of the exoplanet.